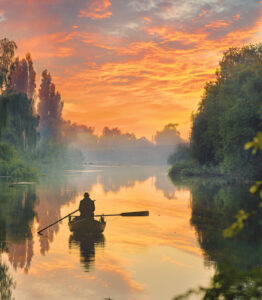 I was somewhere near the Missouri River, just inside the boundary of the Standing Rock Lakota reservation on the border of North and South Dakota.

The heat was insupportable. I could not drink enough water, could not keep a towel wet enough around my neck to ward off the searing pain of the relentless summer sun.

The temperature registered 112 degrees. The wind burned like the devil’s breath.

I had stopped at a small old-time grocery store with a few poorly stocked wooden shelves and an old cash register with mechanical keys. It served the local reservation population, mostly by selling the kids bags of chips, candy bars, and soft drinks. Wrappers and cans and bottles lay discarded in the ditches and on the sides of roadways.

It was not the kind of rest stop I wanted, but I was desperate for some relief from the heat. And I was more than a little apprehensive about the drive ahead of me on the lonely highway that snaked into the distance through the empty, baking, treeless hills.

But what made me the most apprehensive was a feeling of almost abstract dread that something was out of balance. The land was too hot, too dry, even for this season. Something was frightfully wrong.

A two-time winner of the Minnesota Book Award, Kent Nerburn is the author of fifteen books on spirituality and Native themes, including his great trilogy that began with Neither Wolf nor Dog, and continued with The Wolf at Twilight and The Girl Who Sang to the Buffalo. His book, Chief Joseph and the Flight of the Nez Perce, was featured on the History Channel. He also edited The Wisdom of the Native Americans. Nerburn lives with his wife just outside of Portland, OR. His website is www.kentnerburn.com. This article is excerpted from his book, Voices in the Stones. Copyright © 2016 by Kent Nerburn. Reprinted with permission from New World Library.

To return to the home page, click on the Home tab or the back arrow