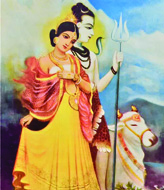 The dualism which the Guru Gita addresses is the nature of the guru. The truth from the personal perspective is that the guru is a human being who teaches. She has two arms, two legs, and all the physical traits of any other mortal. The truth from the transcendent level is that the teacher is but a channel for guru tattva, the essence of guru-hood. The human guru is a manifestation in time of an immortal guru, often identified with Shiva, Who eternally brings yogic wisdom to humanity.
To appreciate the teachings of the Guru Gita, the reader must be willing to entertain the tension of holding both the personal and transcendent paradigms in consciousness. Neither is to be accepted at the expense of rejecting the other. Rather, the friction created by holding opposites in the psyche generates an energy which will lift the student to a higher level of consciousness if he remains earnest and avoids the temptation to resolve the dynamic by a premature mental either/or, yes/no conclusion.
On an esoteric level, Mount Kailash is described in other yogic texts as having four sides constructed of crystal, ruby, gold, and lapis lazuli. Shiva is the indwelling immortal soul, and Parvati is the energy that manifests as life and form. As such, the Guru Gita is a song sung by one’s own soul in the world of body and mind, in order to lift consciousness to a peak of exquisite treasures.
Read full article in the current issue.
© 2017 by Prem Prakash, excerpted from The Song of the Guru: A Modern Translation and Commentary on the “Guru Gita,” published by Lotus Press. Prem Prakash is co-director and teacher of yoga at the Green Mountain School of Yoga in Middlebury, VT, www.gmsy.org. He has authored several books on the Yoga Path including The Yoga of Spiritual Devotion: A Modern Translation of the Narada Bhakti Sutras and Universal Yoga: The Bhagavad Gita for Modern Times. In 2008, Prem Prakash was honored by the Institute of the Himalayan Tradition as a Yogiraj, “an accomplished yogi who lives in the world.”
To return to the home page, click on the Home tab or the back arrow